HardwareZone.com Tech Show Portal, first launched during Sitex
2010, is back in March 2011 with extensive news coverage and updated
promotional brochure downloads for IT Show 2011. This is a one-stop
portal where the most extensive coverage of mega IT shows can be found. 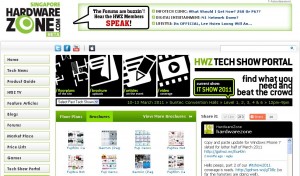 Through this portal, HardwareZone.com users were able to view

the floor plans of the entire show, download the products
brochures and promotions from the exhibitors. They can also participate
in the IT Show 2011 forum threads to update their findings, discuss and
seek advice from the community. 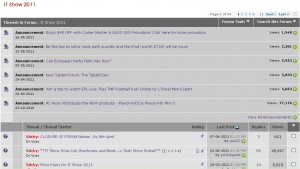 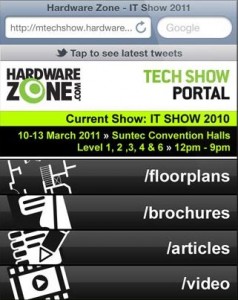 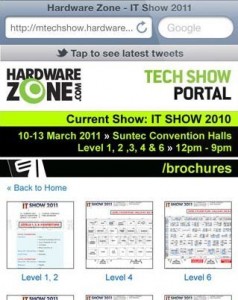 Similarly to past tech shows, the HWZ team gave our users the
advantage of

knowing what to expect at the show with a preview article. The
article was updated with information of all the major booths and star
products, allowing users to plan ahead before making their way down.
More articles were published within the first day to complete the full
in-depth coverage of the show. On top of articles, the team used
micro-blogging service, Twitter to tweet out interesting deals to our
users on the go. The team also posted on the HWZ Facebook page with
latest IT Show 2011 updates

from the HWZ Tech Show Portal. This had provided our users real
time updates of the latest deals and an avenue to seek advises from the
on-the-ground team.

All of these extensive coverage and social user interactions were
mashed up in this Tech Show portal, providing easy access to
information for our users. This one-stop space with fast, accurate and
in-depth information had garnered more than 1,340,000 page views during
IT Show 2011 and more than 1,000,000 views for the IT Show 2011
brochures on Picasa.