To boost awareness of the VIERA brand in Asia, Panasonic embarked
on a massive 4-month online campaign. With strong presences in
Malaysia, Indonesia, Philippines and Singapore, HardwareZone.com was
the natural medium of choice.

Mechanics
To generate buzz and entice users to
go to the microsite, Oomph! proposed a game and contest
element within the site. 2 exciting flash games were created with the
VIERA branding – Speed Typist and VIERA Hunt. In both games, the grand
prize that had players buzzing with excitement was a Panasonic VIERA
TV.

Aside from testing the user’s typing speed and accuracy,
completing certain keywords relating to VIERA awarded “bonus power”
for the player to store and use.

In Photo Hunt, players needed to quickly scour the photos for
items on the list. At the same time, a VIERA TV was always showcased
as a staple in any living room.

To ensure a continued stream of traffic to the microsite, the 2
games, along with rich media publicities, were launched back-to-back.

The following ad units were used:

Rich media works: The Peel Down ad unit proved to be
extremely effective in capturing audience’s attention. Out of the
people who saw the ad, a staggering 94% clicked on it to expand the ad.
Impact Leaderboard also fared well, with 75% of viewers interacting
with the ad unit. 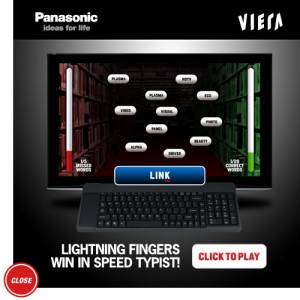 Effective eDMs: eDMs had an extremely high open-rate
of 30%. Subsequently, CTR went as high as 12%. This shows that the
HardwareZone.com audience is receptive to promotional messages.

Conclusion
With sterling performances from both
rich media ad units and traditional eDMs, this campaign is proof that
the HardwareZone.com audience remains as receptive as ever. Overall,
this campaign was highly successful in meeting Panasonic’s objectives. 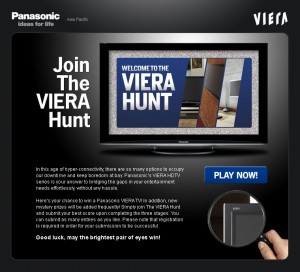