HardwareMAG.com, a five-country regional portal for readers of
consumer tech magazine HWM, held its first-ever live blog and coverage
session of CommunicAsia 2009 at the Singapore Expo on 16 June 2009.
Using software that integrates the world of live blogging, video
posting, Twittering and up-to-the-minute polling, the session started
at about 9:45am and ended before 3:00pm.

The session kickstarted with a recap of the previous day's
announcements by Nokia and Samsung, before moving on to the showfloor
coverage of the various mobile phone booths. As readers from various
countries began posting comments, the team on the floor visited
requested booths, twittered and posted updates, while remote editors
answered queries and offered their viewpoints.

The session was lively and by-the-minute, filled with photos of
key products, showgirls, a poll session and comments from key people
the team interviewed. There was no denying the euphoria that readers
felt as if they were right there on the showfloor themselves. When the
session finally ended with an LG Press Conference, readers were able to
get a taste and feel of what the show felt like, even if they were far
away in Malaysia or the Philippines.

Of course, the live blog session will be supplemented with
comprehensive articles, interviews and videos by the end of the
campaign.

There are plans for the team behind the live blog session to
venture further into this medium, as there will always be readers in
the technology field clamoring for up-to-the-second announcements,
especially for new products at major tradeshows. There is nothing much
more enriching

event (be it online or physical), what more with editors and
writers as their tour-guides. 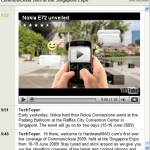 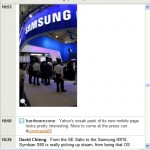